DigitalGYD content is free. When you purchase through referral links on our site, we may earn a small commission.

We apologize for the state of the page. The content is all there, but we are in the process of a major design and content overhaul to make this even better for you. Please check back later for an updated version.

Check Out Our Latest & Greatest Posts ››

FIFA world cup 2014 is on the coming and we, the Football fans are eager to catch up all the news. There’s a discussion on every coffee table and high teas don’t seem high enough without serving a cup for Brazil. There’s always a stream of news about the stage that is being set in Brazil, and who will disagree that Twitter is the greatest platform to catch up all the buzz . So, here are top 10 official twitter accounts to follow for world cup 2014. So, go and follow your stars and show up that you are the biggest fan.

@FIFAWorldCup : This is the official twitter account of world cup 2014 and gives you unlimited official feeds from Brazil, 2014 FIFA cup’s host.

@FIFAcom : This is authorized account of FIFA.com . Follow them for genuine international football accounts and the news is served in many languages like French, Spanish, Arabic,German and Portuguese.

@brazuca : This account owner is the football of 2014 world cup and it tweets in English and Portuguese. you know what love me, or lose me! oh and follow me

@2014Fuleco : This armadillo, the official FIFA mascot this year loves to play football and being in pictures so why wait just log in to twitter and follow Fuleco.

@equipedfrance : Official twitter account of french team. Les bleus as they are called back home, have their tweets in French.

@ussoccer : Keep up with the latest updates from team US.

@socceroos : The Australian football team have something in common with Americans, you guessed it right the call football, soccer.

Bumper Bonus: These data were collected from Hongkiat and if you want more information about whom to follow on Twitter  just visit Footballersontwitter. 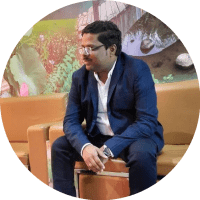 I'm Swadhin Agrawal, the founder of multiple times award-winning blog DigitalGYD.com. From being broke in 2012 to building a 5-figure blogging business, I've seen it all. I help people build and scale profitable blogs...

How To Start A Blog

DigitalGYD is a multiple times award-winning blog and the only resource you need to start & build a profitable blogging business.

Blogging Tools We Use